It is Friday, or so I’m told, in we head east of the tracks to Brooklyn Vegan day show. Three stages and tons of bands. Today we see the last song by Cold Showers in a given credit must really hard to work up a  serious radio early today super rock and roll bands. (That last sentence was how the voice-to-text on my phone translated my desire to say it was too early to play serious rock; it sounds like a failed Turing test, though.)

We catch The Big Sleep, a trio with a really great sound. Simple but like a big wave that, once it gets to you, you finally realize you can’t avoid it. This is probably the best thing about SXSW: you go somewhere to see a band you are excited about and end up discovering a slew of new bands.

It’s hard not to imagine everyone in the room not becoming a Twilight Sad fan after seeing them play. The room and crowd is smaller than when Crossett and I saw them on their first us date, back in DC in 2004. As usual, there is a technical glitch before they start, although we are hard pressed to notice it. Earplugs in, we watch Jamie turn into Mr. Hyde onstage. It’s a quick set people with iPhones are clamoring to get up close to the guy shouting Tourette’s-style in the air with his eyes rolled back in his head. Meanwhile the guitar is laying out some serious layers so dense you can climb them.

We dash over to the second indoor stage to catch the end of Exitmusic’s set but they are running late so we miss nothing. They have a strong but diaphanous, ethereal sound. We were glad to see their whole set as we only saw a small part on Tuesday night.

We rush back to the first indoor stage in time to hear two songs by Eleanor Friedburger. This time the audience is packed. She plays a comfortable solo acoustic set. We catch the last two songs only but are there long enough to pick up on her ease and comfort on stage.

We get outside in time to sit on a big, wonky leather couch left in what can only be descried as a play area. There are some non-music attractions: a cornhole game, wine tasting with free T’s and felt hats, coconut-based ice cream, and a photo booth.

We effortlessly work our way to the second row from the stage with plenty of time before Django Django start. Django Django play a whole new set, quite a bit different than the one we saw at the Scottish showcase. They have a well-scrubbed boys next door look, mixed with hints of Devo. Their music is filled with some insidiously big dance beats, but they also favor playing very old-school hand-held percussion instruments.

Tennis plays next. Their sound is as light and insubstantial as their lead singer who looks like she would float away in a strong breeze. Lovely and energetic but lacking depth, the singer and the music are, respectively. We leave for one of the smaller stages after two songs. 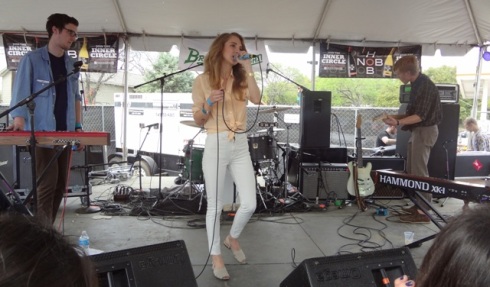 Inside, we settle in on a band of youngsters calling themselves DIIV. Now, these young men must have been listening to oldies like The Cure and Love & Rockets because they did a very decent job of layering their guitars over a straight-forward drum line. The singer looked like he was wearing his father’s three-sizes-too-big shirt. 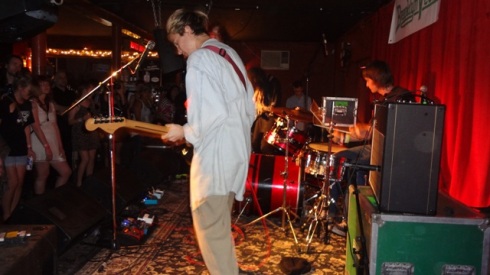 Finally, outside for The Black Angels, a band that greatly disappointed me last year when they closed South By San Jose on S. Congress. Crossett said they were really good two years ago and give them another chance already.

BTW, there are uniformed women here toting tablets and asking people what they think about, sorry, aboot Quebec. The reward for answering is discount smokes. No thanks, I’m getting enough second hand smoke to develop an excellent case of black lung. As an added bonus, there’s so much pot smoke here that I’m starting to think that the Harold and Kumar sequel maybe was funny.

The Black Angels are better than they were last year but it’s kind of like getting a ride from someone who once drove you recklessly. Even if he promises to be more careful, you still have that seed of distrust. Last year they played what sounded like one long drone-fest with one indistinguishable song following another. Even if the sound is good it’s kind of like watching Andy Warhol’s “Empire”: watching a building for six hours can get boring unless you’re completely stoned.

Crazy guy in audiences is drinking Four Loco. Redundant much?

That night we head to the Red 7 Patio to hear a showcase of mostly lighter and more melodious bands. We enjoyed Husky and Poor Moon (including a Fleet Fox). I didn’t care for King Tuff — at least partly because of the slam dancing co-eds that jumped in front of us for this set.

Shearwater played a more muscular, straight-ahead, guitar driven rock. Jonathan got contacts, ditched the piano bench and let the guitar shout out for him. I haven’t heard much of the new release but I shall in short order. 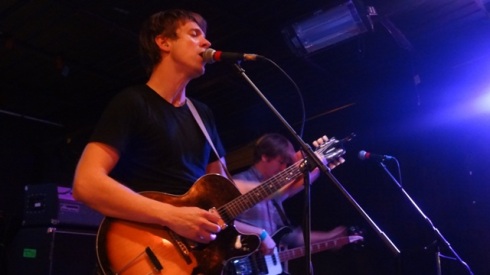 One of the shows I was most looking forward to was Father John Misty’s and this was based mostly on one song: “Hollywood Forever Cemetery.” Sometimes you hear something and you like the “sound” of the song as well as the song itself. You feel like this kind of thing is up your alley and you don’t need to hear more than 30 seconds to know that you are probably going to like pretty much everything else you hear from this CD.  That’s what this song was to me. Anyway, FJM did a bit of a speech to start off. I saw on his Twitter feed that he was very concerned about some grave situation somewhere in the world recently (I don’t recall the details but you know: famine, inequity, somesuch). He started speechifying about Doritos Jacked instead. Very funny and I thought I recorded it but I didn’t. In other news, his set (backed by most of Blitzen Trapper) was fun, partly moody, partly twangy and filled with good humor.

Blitzen Trapper had another great set. Lots of classic rock influences and lots of fans. (If you need something longer read what I wrote about them on Day 2.)