The Saturday of SXSW is the day Crossett and I decide to finally take it easy. We have a lavish breakfast at the Kerbey Lane Cafe (University location).

From there we drive to South Congress, three miles and a world apart. This section of town has more recently been built up and has a really nice eclectic feel. Fun-weird Austin, fewer homemade tattoos and people yelling at themselves weird. This year promises to be low-key and that suits us fine as we have been running pretty ragged over the past few days. We generally head toward the Yard Dog Art Gallery. They have a small stage in the alley behind the building where we saw Peter Buck play last year. Additionally, my high school friend, Laura, lives around the corner. The gallery is very cool. Unfortunately,the prices are a bit out of our comfort zone.

We do a little shopping in the nearby stores, stopping to listen to the many impromptu stages with bands playing all along the street.

We duck into the Yard Dog alley to hear the end of The Silos and then the full set by Ken Stringfellow, the former lead singer for the Posies. You may recall the Posies as a decent band from Seattle with the unfortunate timing of hitting some popularity just before Nirvana and grunge hit big. This was all well and good for flannel shirt sales and wah-wah peddles but not so good for the Posies. Ken Stringfellow makes an opening scatalogical joke about not being able to perform on stage, plunks his microphone stand in the crowd and steps up — right in the middle of the crowd. He plays a beautiful set. Although this is only my second SXSW, I feel like this set, this show, this atmosphere must be like before all the rampant commercialization and consumerism hit the festival. I don’t really know, but it seems right. 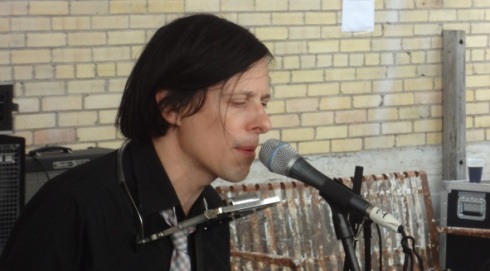 He is followed by a rocking set by Chuck Prophet. Very bluesy, pass-the-beer kind of stuff. The power goes off three times during his set. The first time the crowd just kept singing in his place for about two minutes. The subsequent losses of power were handled well by all.

We finally head over to Laura’s house, about 30 feet away. There is definitely something about the friendliness of Texans (or at least folks who end up in Texas one way or another) because we have a nice time chatting with her friends and neighbors as she is called away on hoisting duties.

We get a good night’s sleep and get up early the next day to catch our flights home.

See you next year, Austin!